Lord, when was it that we saw you hungry or thirsty or a stranger or naked or sick or in prison, and did not help you?  — Matthew 25:31-45

It was a raw, chilly day. Late November, maybe, but I’m not sure. I’m not sure of the year, either, although I know I was a young adult. I think I was walking alone, but even that I am not sure of.

This is what I do remember:

I was walking along the streets of midtown Manhattan. I was dressed in a wool coat, and I had a large, rectangular wool shawl wrapped around my shoulders as well. I passed another young adult, lying curled up on the sidewalk. She was half naked. Naked enough that it was clear something dreadful must have happened to her; it was far too chilly a day for anyone to be dressed that way by choice. She had a piece of something, paper maybe, pulled over her. Her eyes were closed.

And I kept walking.

I wish there was more to this story. Another ending, some information about what became of this young woman. But I have no other ending to give you, because I walked by. I assumed someone else would take care of her. But later that day I found myself haunted by that moment. I kept seeing that woman, lying on the street, shivering. And I kept seeing myself, hurrying by in extra layers of warm clothing.

Lord, when was it that we saw you naked, and did not clothe you?

But here is the surprising thing: Both groups – the sheep and the goats, the blessed and the cursed, the compassionate and the indifferent – both groups reply to the king with the same question:

It apparently did not occur to either group that by feeding the hungry they would be serving their king. Whether they received the king’s blessing or the king’s curse did not depend on how well they recognized their duty. It depended on how well they loved one another.

We ask, When was that it we saw you?

But Jesus asks us, When was it that you truly saw anyone? 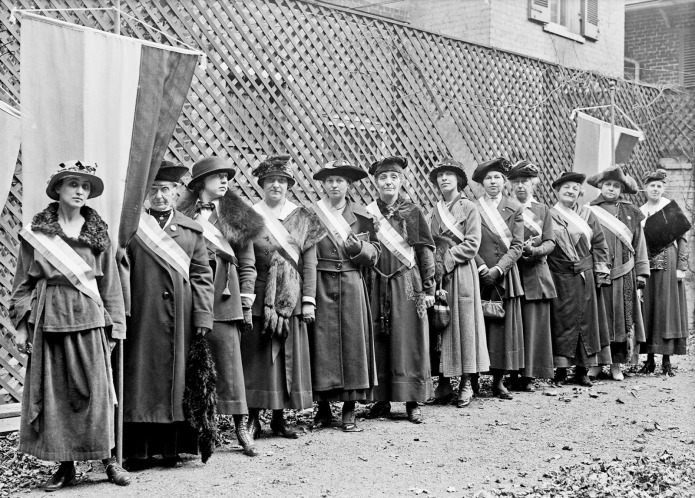 “Since we are surrounded by so great a cloud of witnesses, let us also lay aside every encumbrance and sin which entangles us, and let us run with endurance the race that is set before us…” – Hebrews 12:1

Last Saturday was All Saint’s Day. Today is Election Day. The proximity of these two events has set me to thinking about a particular saint, a woman by the name of Charlotte Woodward. Not a saint according to the narrower, Roman Catholic definition; but a saint in the broader, biblical tradition.

In the year 1848, Charlotte Woodward was about nineteen years old. She was living somewhere near Syracuse, New York, working from home as a piece-meal seamstress for a glove manufacturer. One day, she spotted a small, unsigned announcement appeared in the paper, calling for a meeting to discuss the condition and rights of women. Charlotte immediately ran, from house to house, looking for neighbors as excited by that announcement as she was. She gathered a half dozen friends, and together they travelled in an open wagon to Seneca Falls. Young Charlotte would become one of 68 women who signed the famous Seneca Falls Declaration, supporting a woman’s right to vote.

Charlotte Woodward was 91 years old, when she finally gained the right to vote, in 1920. Of all the women who signed the Seneca Falls Declaration, she was the only one who lived to see that day.

What a great cloud of witnesses must have surrounded Charlotte Woodward, on that election day in 1920.

There’s something of a mixed metaphor here, in this verse from the Letter to the Hebrews (why is there a cloud surrounding a foot race?),  but the passage is no less beautiful for that. “Since we are surrounded by so great a cloud of witnesses, let us run with endurance the race that is set before us.” Who are these figures in the mist, that bear witness as we run? They are not spectators in the stands; that would make for a more consistent metaphor, but it misses the point. For the cloud of witnesses that this passage refers to are Abraham, and Isaac, and Jacob, and Moses, and all those who have lived and died in faith, those who have run the race before us, and have now passed the baton to us.

On election day, in 1920, Charlotte Woodward was too ill to travel to the polls, and some historians believe that she never did cast her ballot. But on Tuesday, I will. This is a gift, a baton passed to me by the men and women of Seneca Falls, and it is up to me, to all of us, to take it and run with it, and to pass it on. When I enter the ballot booth today, I will not be alone, but I will be surrounded by a great cloud of witnesses. And I am convinced that Charlotte will be there, by my side.

(based on a sermon preached at Belchertown UCC on November 2, 2014; with thanks to Rev. Peter Wells, who introduced me to Charlotte Woodward)