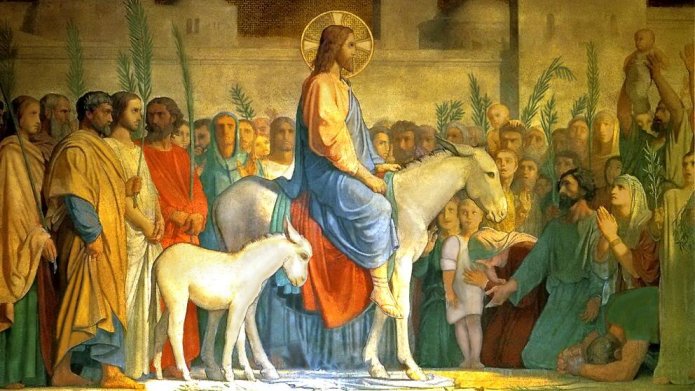 Jesus entered a city on edge.

On Palm Sunday, Jerusalem was crowded with pilgrims, faithful Jews from all over Israel. They were there for the celebration of the Passover. They were gathering in Jerusalem, just as families will be gathering in their homes later this week, to hear again the story of their deliverance. The Passover Seder may have been different then, but the Passover story was the same: how God heard the cry of a suffering and enslaved people, and led them, with many signs and wonders, with a strong hand and an outstretched arm, into the freedom that was their birthright.

That’s a mighty dangerous story to tell to an enslaved and colonized people. No telling what sort of ideas they might get.

On Palm Sunday, Jerusalem was also crowded with Roman soldiers, keeping a close eye on the crowds. They knew that Passover could be a particularly troublesome time in this occupied city. Crowds could get out of hand. A strong show of force would be needed to keep things under control. Any sign of unrest, and the Empire’s response would be swift and brutal. The High Priests knew this, and did their best to keep the celebration peaceful and orderly, for fear of retribution.

It was fine for the people to celebrate the Exodus of long ago, to tell the ancient story of deliverance. The danger was, that they might apply it to the present day. That the people might decide, not merely to tell it, but to live it. For who was Pharaoh, now?

Yet this had been God’s command to the people of Israel: that they tell this story every year – so that their children, and their children’s children, might remember it. Consider that word: re-member. It is the opposite of dis-member.  When we re-member a story, we give it hands and feet, arms and legs. We embody it.

Which was exactly what the Priests and the Soldiers were afraid of.

Their concern would be shared, centuries later, by American slaveholders, many of whom forbid their slaves to read the Bible for themselves. The white preachers offered an enslaved people a carefully censored scripture of obscure verses from minor epistles, urging obedience to masters. But meanwhile, out in the hush arbors, far from the masters’ eyes, stories of the Exodus spread like wildfire. When Harriet Tubman began to smuggle her people to freedom, they named her Moses.

Such is the power, of a story remembered.

So it is no wonder, that Jerusalem was on edge, on that Passover long ago.

And now, into this troubled mix comes Jesus, and right away, they can see he’s trouble. He  rides into town on a donkey, openly mocking the imperial procession with its display of military might. It’s a piece of guerrilla street theater. Jesus is acting out a scene from scripture, a verse from the prophet Hezekiah: Shout O daughter Jerusalem, for behold, your King comes to you, triumphant and victorious is he, humble and riding on a donkey. The people recognize the story, and they join in, playing their part – until the line between past and present begins to blur, and the story is no longer an historical reenactment, but an act of non-violent civil disobedience.

Years ago I saw a stage production of Crime and Punishment, in which the lead actor strode on stage, picked up one of the footlights, and turned it around, so that it illuminated the audience members. Suddenly we weren’t just watching the play, we were in it.

I imagine that Palm Sunday was something like that. Jesus broke through that fourth wall, the invisible barrier between stage and spectator, past and present, religion and real life. Suddenly the people weren’t just telling the story; they were living it.

Such is the is power of a story remembered.

For the past few days, my Facebook feed has been filled with photographs — images of processions filling the streets of cities and towns all around this country, of protest marches led by young people of all genders and races. And among these images, I found this thoughtful posting, reflecting upon the youthful determination of the student protesters:

“Conservative parents in the 90s burned copies of the early Harry Potter books because they feared the influence of fictional wizardry and magic. They should have looked deeper. Their children are smart enough to know the difference between the fantasy of magic and the reality of bravery in a world with pervasive darkness. Through J.K. Rowling, they have seen “their” school be attacked by and defended from far more frightening forces than lawmakers and ministers. They have learned that evil doesn’t live in one villain, but is spread into others and sometimes feels like it’s screaming across the sky. But you don’t give up. You don’t run. You don’t hide. You pick up the sword of Gryffindor — whatever that is in your life — and you wield it with all your strength until every last flailing lashing venomous reptile lays at your feet. That’s perhaps Ms. Rowling’s most important and lasting legacy. Not magic, but persistent courage and perseverant action. This is the Harry Potter generation, and they’re picking up their swords.”

Such is the power, even now, of the stories we tell.

What story will you remember, this Holy Week?

SERMON by Liza B. Knapp for the First Church of Deerfield, Massachusetts, March 25, 2018.

David Silverman, Getty Images (2010). A Palestinian boy carries palm branches for sale to Christian pilgrims, past Israeli police guarding the traditional Palm Sunday procession from the Mount of Olives to the Old City of Jerusalem, March 28, 2010.