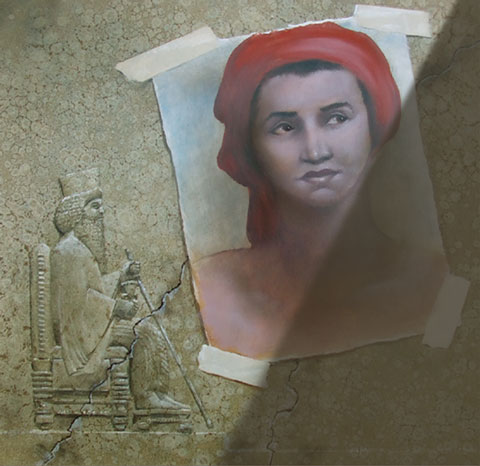 Esther is not her name.

Y’all catch that? Her name is Hadassah. But she is a Jewish woman living among Gentiles, an Israelite living in exile. She needs a Persian name – one her neighbors can pronounce. And so she is known as Esther.

But it is not her name.

Esther was taken into the king’s palace… but she did not reveal her people or kindred, for Mordecai had charged her not to tell. (Esther 2:8,10)

I had a good friend in college who was the daughter of Cuban immigrants. She married an Anglo guy from the Midwest. When their daughter was born, they named her Gabriela.

A short while after the birth announcements went out, a mutual friend called me on the phone. “I don’t understand why she would give her daughter a name like that,” she said. “Why would you give your daughter a Spanish name?”

“But why draw attention to it?” my friend wondered. “It’s just asking for trouble. Why not spare her all that discrimination?”

The Megillat Esther – the scroll of Esther — is about many things: gender dynamics, racial violence, leadership, pride, faith, risk. But the dramatic heart of the story is hidden right there in its name: Esther.

Esther is a story about passing. About the masks that we wear, to fit in; and the consequences, of leaving them on, or taking them off.

I recently came across an article in the UU World magazine, written by a man whose mother passed as American Indian. She was actually Mexican, but to her white neighbors it was more glamorous, more praiseworthy, more acceptable for her to be Native, than for her to be Mexican. She named her son, Brando Skyhorse.

He defines “passing” as claiming membership in a group of which one is not, in fact, a member, in order to access the privileges of membership. It can refer to a Jew passing as Christian, or a light-skinned African American passing as white, or a sick person passing as healthy, or a gay person passing as straight. I know something about that last one.

Passing confers privilege, but at a cost. The mask may protect us, but it is also suffocating.

Then again – perhaps Esther embraced her new name. She was, after all, a fourth generation Persian. When does an immigrant family stop being immigrants, and just become part of the melting pot? Maybe she never really liked the name Hadassah. Maybe she felt more free, more herself, as Esther.

But then Haman comes along, breathing murder for the Jews, and Esther must decide:

Who is she, really? Who are her people?

Who knows? Perhaps you have come to royal dignity for just such a time as this. (Esther 4:14)

Here’s an interesting thing about the book of Esther. God is never mentioned. Not once. Among the books of the Bible, it is unique in this respect.

Of course, God is implicit in the tale; why else would Mordecai refuse to bow before Haman, if not for his belief that God alone is worthy of homage? Yet when Haman asks him why he won’t bend the knee, Mordecai says simply, I am a Jew.

It is an answer with consequences.

Who am I? Who is my God? Who are my people? These are not three separate questions, but all one and the same. They must be answered together. And the answer will have consequences.

What is your answer? What might those consequences be, for you?

For who knows – perhaps you, too, have been called here, for just such a time as this.