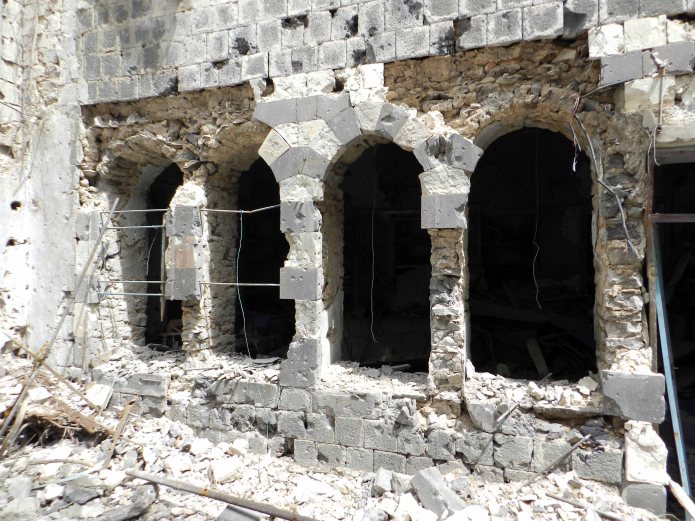 This is the day that will seal his fate.

He does not enter the city quietly. He does not try to blend in with the crowds. Instead, he makes an entrance, much as a military general might enter in triumph, riding upon a his steed, surrounded by loyal soldiers, greeted by a cheering crowd.

But his ride is no war horse, and his disciples are no army. Their only power, is the power of their testimony. Luke tells us that as Jesus came into the city from the Mount of Olives, “the whole multitude of his disciples began to praise God with a loud voice, rejoicing for all the deeds of power they had seen.”

That loud voice is their only weapon. But it is threatening enough, to the powers that be.

Those words — blessed is the King who comes in the name of God – are enough to convict Jesus and his disciples as enemies of the state. No wonder the Pharisees in the crowd urge Jesus to silence his disciples. After all, they know how the Romans deal with public dissent. They have seen the crosses before.

And so the Pharisees say, Teacher, order your disciples to stop! But Jesus replies:

Were they to be silenced, the stones would cry out.

I used to imagine that this as a something miraculous and joyful – maybe loud, rocky clapping, or a ringing of bells – the sound of creation itself bearing witness to the presence of God.

I used to imagine it that way, but now, I’m not so sure.

Luke doesn’t say, the stones will shout for joy – although some Bibles translate it that way. Luke says, the stones will cry out. It’s the same Greek verb that Luke uses for the blind man, who cries out to Jesus for healing. It’s the same verb Luke uses for the possessed man, who cries out to Jesus for deliverance. They cry out, save us.

Which, by the way, is the meaning of the word Hosanna.

Jesus speaks of the stones again, in his very next words. Jerusalem, he says, if only you knew the things that make for peace.  But the days will come upon you, when your enemies will surround you, and crush you, and there will not be one stone left upon another.

Is it then, I wonder, that the stones will cry out?

Palm Sunday is one of those holy days that move around from year to year. Like Passover, and Ramadan, and Easter, it falls on different calendar dates in different years.

In the year 2011, Palm Sunday fell on April 17th.  It was on that date, in the year 2011, that a group of peaceful protestors gathered outside their mosque in the city of Homs, in western Syria. They were calling for an end to nearly five decades of martial law. They carried no weapons, except their voices. But their voices were threatening enough, to the powers that be. They were met with a rain of bullets that killed twenty five people.

The next day, more protestors filled the streets. One of them told a news reporter: ‘I am forty-five years old, and this is the first time in my life that I have broken the barrier of my silence.’

For weeks, the protests continued — but so did the gunfire, until eventually the protesters took arms themselves, and the government responded by laying siege to the city, and bombarding it with artillery.

On Palm Sunday, in the year 2011, Homs was a city of 1.4 million people. Today there are less than half that many living there. Drone footage over the city shows block after block after block of walls ripped off, roofs collapsed, rubble littering the streets. In the oldest part of the city, there’s barely a single intact building. There are just stones.

But the stones still cry out. More forcefully and more eloquently than any words, the stones bear witness to the injustice done there.

The people who took to the streets of Homs on that Palm Sunday took the same leap of faith that Jesus and his disciples took on the very first Palm Sunday, nearly 2000 years ago. Speaking truth to power is never without risk.  The cross, the tear gas, the fire hoses, the bullets, the bombs — the tools of empire may change, but the rationale is the same. Then as now, the oppressor offers a choice: silence, or violence.

But then as now, the words of Christ ring true: Your violence cannot hide the truth, for God is our witness. Silence these voices, and the very stones will cry out.

Today it is Palm Sunday, when Jesus and his disciples take to the streets, shouting Hosanna. By the end of this week the disciples will have been driven into hiding, and Jesus himself will be dead and buried, beneath the rock. Yet even then, the stone will have its say.

But that is a story for next Sunday.

Today it is Palm Sunday, when the streets ring with the voices of those who will be silent no longer.  And we cry out with them, for this is our work this day: to find our voice, to speak our truth, to risk the cross for freedom’s sake. To take the step that may seal our fate.

Let us bravely cry Hosanna today, so that in the fullness of time, we may shout Alleluia when the stones at last roll away.